We arrived at the Camping Le Moulin Vieux the previous evening in the rain. I had really been looking forward to returning to this site as I had spent a week there in 2011. The last time I visited it was extremely hot and there was lots to see in and around the shallow river. 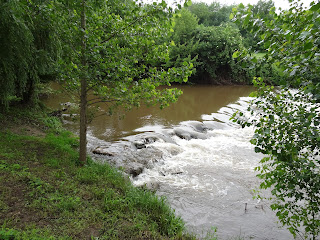 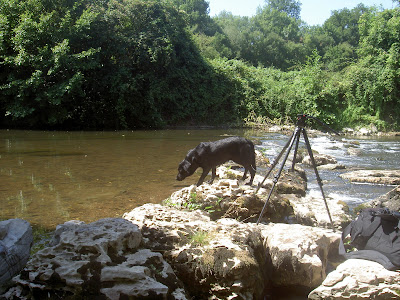 Videograbs from my Trip DVD. See Trip DVD's for sale.

The weather today was largely overcast with intermittent rain and the odd 10 minute sunny spell but cold.
Anyway making the best of it, we searched around the meadows and managed to turn up a few odds and ends.

Early on the 13th we left the area to head for La Brenne. We arrived Le Parc de Maison, Le Bouchet by mid morning. The pond in front of the restaurant was an excellent site for Dainty Damselfly (Coenagrion scitulum)

Our species count at this site was as follows:

Our next site visited was the north east side of Bellabouche in the early afternoon. Here we saw our first White-tailed Skimmer (Orthetrum albistylum) and big numbers of Migrant (Southern) Spreadwing (Lestes barbarus).

Next we visited the south eastern side Bellabouche. There was a very nice Heronry here with Purple Heron being the predominant species.


We saw the following:


We spent the night at a beautiful municipal campsite at Rosnay.

Early the following morning we visited a common just to the south of Rosnay to look for orchids before the weather warmed up.

Here we saw plenty of Small Tongue orchid although most were past their best. We also saw Lesser Butterfly Orchid.


We then went to Cherine with a brief stop at Etang Foucault on the way. We had hoped to find Lillypad Whiteface (Leucorrhinia caudalis) at Cherine although we were informed that the pond in which they breed had almost dried up in last years hot weather meaning that they were no longer there. Hopefully they will re-colonise. 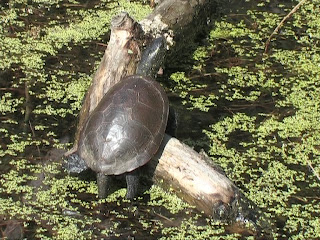 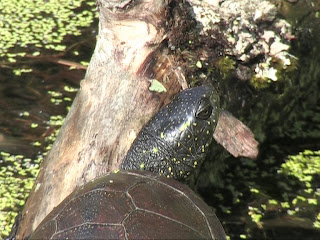 However in the car park at the information centre we found a nice immature female Southern Migrant Hawker (Aeshna affinis).

European Pond Terrapins were also at this site. 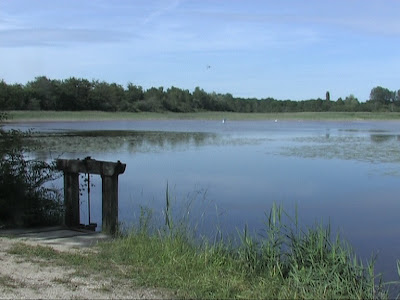 We than went to Etang de Vieux in the early afternoon and returning again to this site in the late late afternoon.
Our main quarry here was Yellow-spotted Emerald. Although we saw one individual, I was unable to film it. There was also an outside chance of Lillypad Whiteface (Leucorrhinia caudalis) but we could not locate any.

We did see the folowing at Etang de Vieux:

We had a brief return visit to the south eastern side of Bellabouche but saw nothing new.

On the 15th June we left our campsite in Rosnay and drove for a couple of hours to the coastal town of
Le Barre de Monts, in the Pays de Loire. Here we had by prior arrangement arranged permission to access a restricted site at Ecomuseum de Daviaud where Dark Spreadwing (Lestes macrostigma) could be found. 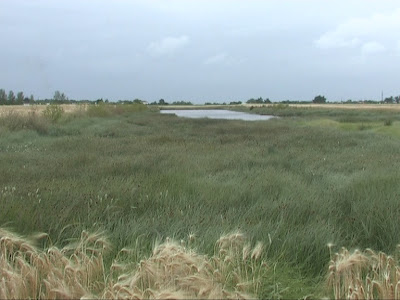 Thew weather today was becoming increasingly windy and cloudy as the day progressed. We were however lucky to see numerous Dark Spreadwings as they kept low in the thick club rush habitat. This required wading into water which was almost above wellington boot level.

Also at this site there were good numbers of teneral Southern Darter. Identification features include the relatively plain thorax sides, extensive amount of yellow on the legs, Black on frons longer than striolatum, shorter than vulgatum and slightly pinched. S sanguinium obviously ruled out on leg colour and shoulder stripes. On showing these to others, the following was also added "the bold thoracic stripes with a dark area between them, somewhat reminiscent of Black Darter S. danae, are also a good guide for (young) female S. meridionale"

We left the area by early afternoon as it started to rain. Our final day in France was meant to be spent at a site  Etang de Joreau near Gennes but unfortunately the weather was not kind to us with rain and cool temperatures prevailling until we decided to leave at lunchtime.Our targets of Lillypad Whiteface (Lecorrhinia dubia) and Dark Whiteface (Leucorrhinia albifrons), would have to wait for another time.